Several years ago an Adventist woman I know had a dream which moved her deeply and gave her peace, but also left her puzzled...


In her dream she was looking down from above on her own funeral. It was at a cemetery near her childhood home in the Midwestern part of the United States, where many dear Adventist people were buried whom she had known in her childhood. At her own funeral now, she saw a small gathering of her close family. She looked up from the scene and saw that she was with her angel. He took her by the hand (and she noticed that she was young again, like a little girl), and they went off towards the horizon, flying over cornfields which in real life are no longer there. It was the most peace she had ever known, and there was a beautiful music she heard.

She wondered what the dream meant, since as an Adventist she firmly did not believe that we are conscious after we die, nor that we are taken to heaven to be with Christ. Sometime later, however, when she was listening to the end of the Maranatha song Glorify Thy Name, she was amazed to hear the very same music that she had heard in her dream! Of course she bought the CD. Afterward, whenever she visited her family in the Midwest she would also make a trip to that cemetery, where she would stand on a hill and look out over the horizon, wondering about the dream. She knew the dream was from God because of the peace in the dream and the music at the end, but she didn't know what the dream meant.

The meaning of her dream...

Her dream has two levels of meaning. Firstly it is a promise from God to her that He is keeping her safe, and that He will be with her when she dies and even after that. Although she has believed she will only sleep when she dies, He showed her that He has something much, much better for her:

Yet I am always with You;
You hold me by my right hand.
You guide me with Your counsel,
and afterward You will take me into glory.

He will take her home to be with Him! She will feel like a little child again, and like the cornfields in the dream, parts of her that have suffered and been lost during her life will be restored.

She doesn't believe that this is what will happen when she dies, because that is not what she was taught by the Adventism she was born and raised into. But God is much greater than what Adventism knows, and greater than what she herself knows. He has already shown her that His peace is greater than she is able to understand. 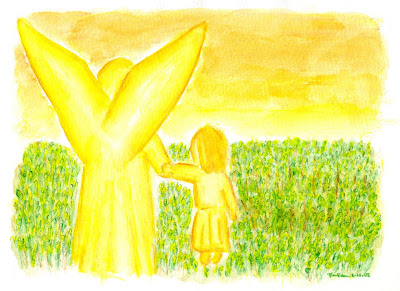 There is another message in her dream that God is sending to her—and to all Adventists:

"A time is coming for the death and burial of an old part of your life. Part of you needs to die and be buried, and then 'you' will no longer live, but I will live in you, and you will soar with Me in My Spirit to restoration and things you have never seen before. The peace that I will bring you will be greater than any you have ever known before.

"But first I will shake your beliefs, and you will feel like parts of you are dying. They need to die so that you may fly free in My Spirit.

"You haven't known how much I am able to do or how great My peace is. But I am telling you these things to comfort you now and in the future, so that when the time comes for your beliefs to 'die', you will not be afraid, but will know that greater peace lies beyond and is coming soon.

"You will see My hand moving in your life clearer than you have ever seen before, and you will look up and take My hand, and we will fly together in My Spirit.

"I will heal and restore parts of your heart that you did not even know had been lost. Just as the cornfields in My daughter's dream are gone and have been built over, so also parts of your heart have been destroyed and paved over. Parts of your growth were stunted and were not able to continue growing. Inside of you there is a child who died when those things happened. I will bring that child back to life.

"This kind of restoration and freedom in My peace is not something that you yourself can accomplish. Just as My daughter cannot fly without Me holding her hand, so too you cannot know My peace and restoration apart from My Spirit carrying you. Your Adventist beliefs must first die and be buried, but know now that I will fill you with My peace even as their 'death' comes and as you step into beliefs that you thought were false.

Search this site for: