Last night I dreamt that a mother brought her child to me so I would pray for deliverance. I was in the basement of a house—not dirty or dark at all, but comfortable and simple. The child was about junior high school age. I prayed and spoke to them about being deceived—that if you want, God will bring you out. But if you don't want it, it's your choice. Without waiting for the child to understand or choose, the mother said firmly, "That's right!" She then took the child by the hand and they went up the stairs together to leave.

The child represents many Adventist people. The mother represents the spirit that was guiding Ellen White and the founders of Adventism. The time is in the days after the foundation of Adventism has been shaken to the core. In the dream I (Ramone) represent Christians (non-Adventist) whom Adventists come to for answers.

The shaking will lay bare the institution's foundation, and will also reveal things about the founders which will destroy faith in them. In turn, after realizing they were deceived, many Adventists will question "the Bible", "Christ" and "God" in general, wondering if everything was a lie. Some of them will go to Christians (who dwell in the true foundation—the simple truth of Christ) thinking that they are following their own thoughts and questions, but they will not realize that they are being led by a spirit.

The spirit that guided Ellen White and the founders in building Adventism is not interested in Adventists actually finding the truth, nor is the spirit even interested in re-establishing Adventism (after its foundation has been torn) or leading them into a new kind of Adventism. From the beginning the spirit orchestrated the building of Adventism's house on sand, and set its people and future generations up for a great painful fall—a fall so painful it would lead into complete unbelief, bitterness, anger and rejection of God.

The spirit ("mother") in the dream is not interested in the child's "deliverance" at all. The spirit only takes the child there to get the Christians to say something, and then the spirit says, "I told you so!" as a confirmation of what the spirit had been telling the child beforehand. (This is in keeping with the spirit's pattern in Ellen White's ministry and in Adventist history—the spirit affirms just a little real truth but credits itself with it, and has the ultimate purpose of leading people away from the true foundation to wherever it wants to take them.)

The spirit has brought the people here not to find real truth, but to confirm the ideas it's been whispering to the Adventists who have just discovered that they had been deceived all their lives. First the spirit built up the peoples' faith in Adventism because it knew that no foundation built on sand would survive. Its ultimate purpose has been to prepare a generation for spiritual slaughter—to build them up so high that when the house collapses it will be a harder fall and will break them so badly that they'll never want to enter any kind of spiritual 'house' again, that they'll never want anything to do with faith, Christ or God again.

The lie that the spirit whispered while Adventism's house still stood was that you can be safe with the proper information—if you know the right things, then you will not be deceived, you will not be hurt. When Adventism's house is shaken and its foundation exposed, people may leave the 'house' ("Adventism") but the spirit and its lie do not necessarily leave them. The first thing many will do will be to find as much information as possible so as to prevent being hurt and deceived again. Of course some of this is natural and good, but there is often a spiritual root in that need for information, in that subconscious belief that we can protect ourselves from deception (and basically save ourselves) through right knowledge.

The spirit has been whispering to countless generations of Adventists,

"The only way to prevent being deceived in the end is to study hard and gain enough knowledge so that you aren't fooled!"

Effectively the spirit taught Adventists that you need to save yourself, that your salvation is up to you and depends directly on how zealous you are in pursuing knowledge. In the same way, after Adventism is shaken, the spirit will speak to some Adventists quietly, saying,

"You were deceived by Adventism because you didn't study hard enough, and the only way you'll ever be safe from being hurt like that again is if you get all the facts straight this time!"

The spirit built up reliance on knowledge; the point that felt 'safe' about Adventism was its claim to have more truth than any other church, and that it claimed to know about the end times and how to survive them. Through "Sabbath" it claimed to know how to be pleasing to God more than any other kind of Christian. Through the "State of the Dead" teaching Adventism claimed to have a stronger safeguard against being deceived by evil spirits. Knowledge was king, and assurance was found in having more knowledge. The reality of God Himself wasn't as important as getting all the facts correct about Him. It wasn't so important to actually seek God Himself; instead the important thing was learning the 'right' information about God (and His 'truth') that the church contained.

When people come out of Adventism with the pain of being deceived still stinging hard, the natural reaction will be to get smarter so that never happens again. For many people this will not include seeking God Himself, but rather seeking more information. It's not a change from seeking "false" to seeking "true", but rather a change from seeking "false" to seeking "something not false". But the truth is a Person—Christ Himself—and seeking truth means seeking Him, not mere information about Him. It means taking the risk of faith. And that's the last thing many people are going to want to do after being burnt so badly by Adventism.

And that is what the spirit (the 'mother') in the dream was preparing her child against. The spirit built up Adventists' reliance on knowledge and having all the information laid out in front of you. So after Adventism is shaken, the spirit tells people,

"You need the right knowledge—solid proof—laid out in front of you so that you won't be deceived and hurt again. But Adventism was so much more thorough and intellectual than other churches—they are not going to be able to lay everything out for you; they're going to tell you to 'seek God' because they themselves don't have answers, and they're afraid of the real answers."

In the dream I, the Christian, responded correctly but exactly as the spirit had prepared the child for. I said, "It's your choice", meaning that if you want God to rescue you, you need to want Him to. You need to call on Him and ask Him, not just stand back with arms folded waiting for Him to "prove Himself" to you before you risk having faith in Him. Calling upon Him naturally seems to involve risk—what if He doesn't answer? We want to know that we won't be calling into the air hoping for something that doesn't exist, because we're terribly afraid of being hurt again, of being deceived and lost.

The spirit takes advantage of that fear and fresh pain, and as shown in the dream, it prepares people to react against the truth that having faith means taking an apparent risk. The spirit will say to these Adventists, still smarting from the pain of realizing Adventism's deception,

And so in the dream the spirit takes the child by the hand, before the child has even been able to make a choice to ask God for deliverance, and the child is led by the spirit out of the basement and house, away from the foundation of Christ. 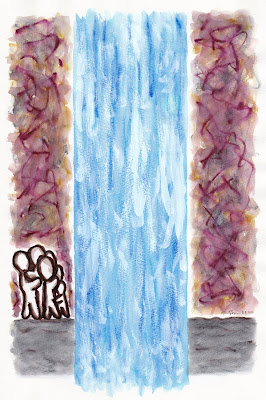 I know you are afraid. Don't be too proud to admit that you have been hurt and are terrified of being hurt again. It's okay. It's natural and I don't condemn you for wanting to have a path of solid rock underneath your feet. I know you want to have everything made plain to you. I know you want to see all the facts and know all the knowledge. I know how much you don't want to fall and be hurt again.

I know how terribly afraid you are of calling to Me for help and stepping out in faith right now. You don't want to be deceived again! You're not sure of Me, and you're not even sure of the 'truth' you do seem to understand underneath your feet. Calling to Me in faith seems like walking into a waterfall on slippery rock right now. You're not sure I'll answer, and you don't want to be swept away.

Do not listen any longer to the spirit which says that more information will keep you safe from deception. Listen instead to Me, and call out to Me to help you. Yes, I want you to choose to call out to Me. But even if you can't find enough faith to call out to Me, ask Me for even that! Ask Me for faith to have faith in Me. I will give you even that!

You are not alone: I am with you! You do not need to figure this out all by yourself or try to protect yourself with a lot of knowledge. That was the way of Adventism, and you have seen where that ended for you. Don't listen to the same spirit that lied to you in Adventism, telling you that your safety was in knowledge. Your safety is in Me."

Search this site for: